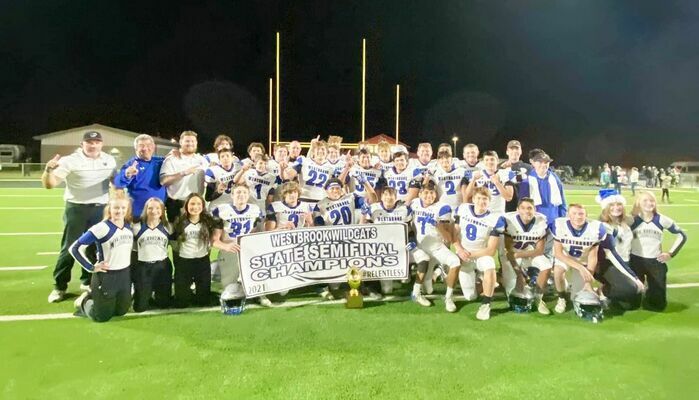 The Happy Cowboys were, indeed, happy when Camden Sperry tossed a short touchdown pass midway through the second quarter of Friday’s semifinal showdown with the Westbrook Wildcats. Then, there in front of a large crowd in Slaton’s Tiger Stadium, Cedric Ware turned into a blue Grinch and took all of the joy of the season for the Cowboys.

Ware rushed for seven touchdowns and helped carry the Wildcats to a bit of school – and state – history with a 54-20 victory over Happy in the Class 1A Division I semifinals. The victory launches Westbrook into its’ first-ever appearance in the six-man state championships on Dec. 15 at AT&T Stadium in Arlington.

Ware gave the Wildcats the upper hand midway through the first quarter. He capped Westbrook’s first scoring effort by taking a handoff from Shammah Star and racing 26 yards to the end zone. The first of his four first-half touchdowns staked the ‘Cats to an 8-0 lead with 4:16 left in the opening frame.

Happy, which had upended Valley a week ago in the state quarterfinals, fought its way back. The Cowboys scored on the first play of the second quarter on a short 8-yard pass from Pace Bressler to T.S. Bow. The touchdown pulled Happy to within 8-6.

Minutes later, after Ware’s second TD – a 3-yard plunge – had given the Wildcats a 16-6 cushion, Sperry breathed life into the Cowboys’ hopes of netting their first trip to the state finals by hooking up with Quay Hodges on a 33-yard scoring toss.

Sperry’s TD gave the Cowboys scores on two of their previous three drives and, more importantly, cut their deficit to four, at 16-12.

Whatever momentum the Cowboys had been building, Ware took away from there. The Westbrook standout put the Wildcats firmly in control of their own destiny with a dominating performance in the final 3 ½ minutes of the first half. He finished off two WHS scoring drives in that span with runs of 4 and 5 yards and sent Westbrook into the half with a 32-12 lead.

Happy, which has advanced to the state semifinals three times since 2016, posted its final threat of the affair early in the third. Bressler finished off a third-quarter drive by scoring on a 38-yard run. The TD cut the Wildcats’ lead to 12, at 32-20, with 7”04 left in the frame.

It was all Westbrook from there.

Ware put the Cowboys on their heels again less than 5 minutes later when he torched the HHS defense with a 58-yard scoring romp that ballooned the ‘Cats’ lead to 38-20.

Bo Payne all but penciled in Westbrook’s name on the state invitation in the closing seconds of the third quarter. He caught a 19-yard touchdown pass from Shammah Stark with just 7 seconds left in the period to push the Wildcats’ lead to 26, at 46-20, heading into the final 10 minutes.

Ware, who gained 258 yards on 22 carries, tacked on the Wildcats’ final TD in the fourth quarter via a 2-yard plunge.

As a team, Westbrook rolled up nearly 500 total yards of offense, including 355 on the ground.

Jimmy Roberts, Jr. also did well on the ground, rushing for 78 yards on eight attempts.

Stark completed five of his 13 passes for 129 yards, including two to Ware that went for 69 yards.

With the win, Westbrook improved to 10-4 for the season and earned the right to face May in the Division I state title game. The top-rated team in the state all season, May defeated Abbott on Friday, 50-48.

The Strawn Greyhounds will face off with Motley County in the Division II six-man state title game.

Local teams headed to area round of playoffs